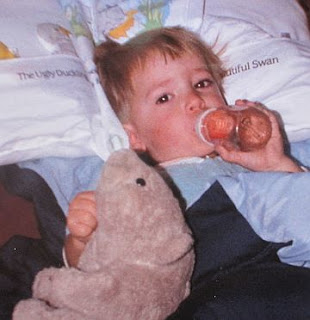 My son had a stuffed bear that he carried with him incessantly as a child. This lump of formerly soft white fuzz became torn, filthy, and lost a lot of stuffing over time. I tried to clean Gundy (as we came to call him, for he was indeed a Gund bear,) but it was a losing battle. He smelled rather pungent up close, but the scent of boy, dirt, bedtime bottles and various other aromatic additions was uniquely beloved. Every night the bear slept with the boy--in fact the bear became the pillow.

Without more than a thought I can see, feel and smell Gundy...and the sleepy toddler in his jammies, hair awry, clutching him. My now-24 year old son still has him, for he is much beloved even now. Time can't change that.

Just because the stuffing has been knocked out of you, and the dirt of this world has turned what was once pure and soft to stiff, matted gray, just because you've landed in the dirt and come up worse for wear, do you think Jesus loves you any less than the boy loves the bear?

Turn to Him as Savior and accept His offer of undying love. Trust me, just as Gundy is loved despite his frazzled, dirty look, the lost stitching on his nose and lopsided stance, you are loved by Christ.


Who shall separate us from the love of Christ? Shall tribulation, or distress, or persecution, or famine, or nakedness, or danger, or sword? As it is written,
“For your sake we are being killed all the day long;
we are regarded as sheep to be slaughtered.”
No, in all these things we are more than conquerors through him who loved us. For I am sure that neither death nor life, nor angels nor rulers, nor things present nor things to come, nor powers, nor height nor depth, nor anything else in all creation, will be able to separate us from the love of God in Christ Jesus our Lord. (Romans 8:35-39)